The #1 Thing You Can Do to Improve Your Pickleball Game, Immediately 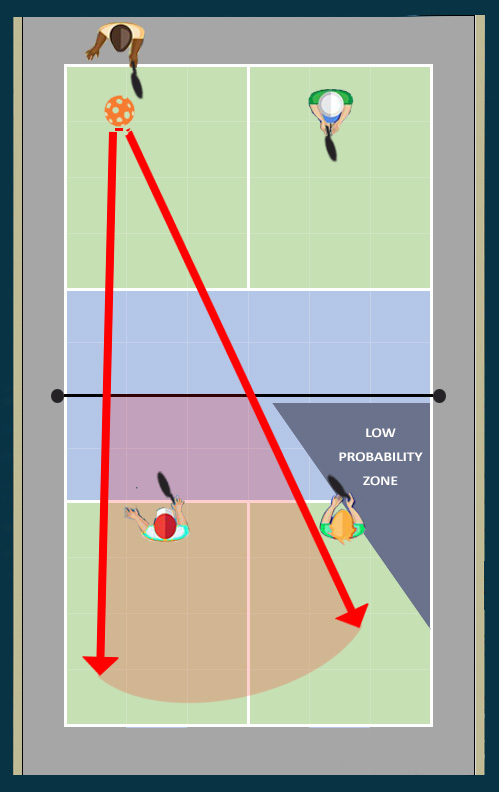 A common request I hear from students is wanting to learn how to “slow the game down.” These are players who have learned the basics of how to hit the ball, but when they get into game play, they find themselves frequently on the run, watching balls get past them and not feeling in control of rallies.

Slowing the game down doesn’t mean hitting softer balls, it means feeling like you have more time to think and execute shots rather than feeling like you’re always just reacting.

Students spend a lot of time and money with instructors or in rec play learning how to use the paddle, the “how-to-hit” basics. Instruction always includes some amount of training on how to get to the kitchen line, but no time on how to position yourself once you get there. To get to the next level, you don’t need to learn an arsenal of trick shots, you need to learn where to be so that you and your partner are controlling the game. I call these the “where-to-be” basics. 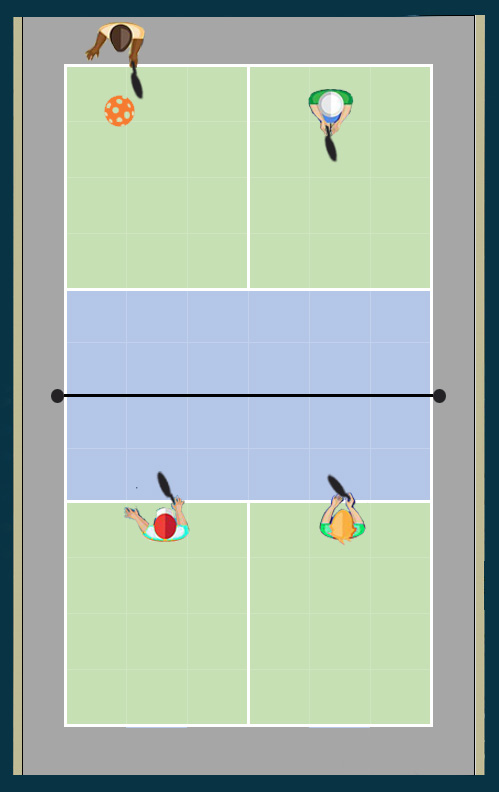 Illustration 1. My Half / Your Half. Erase this Concept!

Hey, I Protected My Half

You can read thousands of posts and listen to endless discussions with players discussing protecting “my half of the court.” Players dutifully learn to let the forehand player cover a smidge more of the center while each defends their half. Each player has their 10-ft. wide area to protect, though occasionally someone will jump into “my half” trying to poach.

If you want to get any good at this game you must absolutely, positively throw out any concept you have that the court is divided in half, and that each player has their half to defend.

Likewise, the center line in pickleball is there for only one purpose: to indicate where the server must hit the first ball. After that, it’s a shame that there isn’t someone who peels up those center lines as soon as the first ball is in play.

The situation depicted in Illustration 1 is playing out at this moment on rec courts all across the pickleball universe, and you experienced it yourself, on average, ten times in each match you may have played today. The team at the bottom has gotten to the kitchen line and their opponents are about to hit the ball from the left side.

Each of the players at the kitchen line has learned from their instructors to keep their paddles up and they’re ready for whatever their opponent is about to do with that ball. But are they?

Where can their opponent realistically drive the ball that is about to be hit from that location?

The arrows in the Illustration 2 show the probable flight path of that ball.

While each of the players at the kitchen line is erroneously covering their “half of the court” you can see the player at the on the even side at the right is mostly protecting an area of the court that has a low or very low probability of receiving a hard-hit ball. For their opponent to hit a ball reliably into the “low probability zone” the player would have to hit a soft shot such as a reset, that can be easily covered, or be on the pro tour.

So, the even side player at the kitchen line is wasting about half of their potential usefulness defending the court against this ball that has a very small chance of being hit.

What Happened to Bob?

I saw a video of two donkeys by the side of a road eating grass, and a mountain lion comes up and snatches one of the donkeys. The other donkey just continues eating grass, probably wondering what happened to Bob. In this illustration 2, both players have about a 50-50 chance of being forced to scramble to get to a shot hit down the left line or in the middle. The player on the right defending the low-probability zone is probably going to end up watching their partner being attacked.

The result of seeing the court as two halves is that players are forced to scramble much more than necessary to get to balls.

Where Should I be?

So, where should the players be on a ball that they hit to the left side of the court? 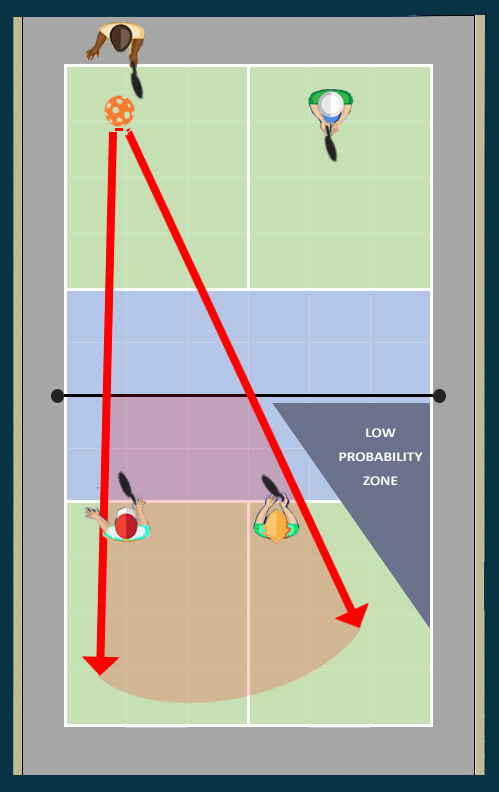 Both players are now in position to cover the likely paths of the ball. For their opponent to drive the ball crosscourt to the bottom, right of the court, the ball has to go directly through the player standing near the center of the court on the even side.

Meanwhile, the teammate on the odd side is covering the line and any ball hit by their opponent directly ahead.

Rather than scrambling to cover the ball that’s about to be hit at them, there’s a high probability that neither player will have to move far to get to the shot.

When you’re in the correct position to defend the court, the game feels like it’s moving a lot slower.

Does this pre-positioning work all the time? Well, no, your opponent might be Ben Johns or someone who can paint the lines like Picasso. But consider this:

Any shot that is about to be hit to your side of the net cannot be hit to about one quarter of the court because of simple geometry – the ball has to get from point A to point B in more or less a straight line, and a hard-hit ball can’t get to every location on the court because it will end up wide out of bounds.

When you learn to recognize the low probability zones, you are effectively reducing the width of the court by one quarter, from 20 feet to 15 feet.

Your average arm span is about 5.5 feet. With one step left or right, your reach, forehand to backhand, is about 7 feet.  When you pre-position yourselves correctly, you and your partner have a combined wingspan of about 14 feet to defend 15 feet of attackable court width.

Or, if you prefer:

If you or your partner hit the ball towards the left side of your opponents’ court, both of you take one or two steps towards the direction of your ball.

No really, it’s that simple.

To become a better player, it’s far more useful to think of the court width being divided into four sections rather than two. Your best position to defend against any given shot is in any one of three of those four positions. A lot can be learned from watching how the pros position themselves in match play, but simplistically, erase the center line from your mind as soon as the serve lands.

Depending on the response to this, I’ll post more on positioning and how it makes the game go much slooooower and your game better. And a shout-out to the eminent and expert Engage Pickleball teaching pro Kevin Beeson for introducing me to the cha-cha-cha method of pickleball tactics!